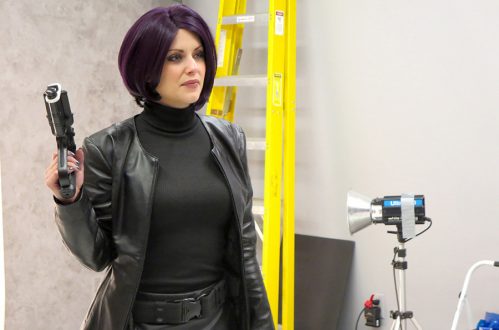 In early April 2015, I had a dream literally come true.

Styling Naomi
Charla Fashing, an experienced theater stylist, helps hide the wires in the iWear prop naturally beneath Kaitlin's hair before shooting. The prop ran off a lithium battery that could be clipped to the back of Kaitlin's collar.

Reflections
Photographer James Fashing has lots of experience shooting wine glasses, so he's a master at figuring out how curved glass is going to pick up reflections. So he was well-suited to shoot Kaitlin wearing the iWear prop.

Progress
James, Pat, Kaitlin and Charla have a look at progress during the Ghosts set.

Smile!
We often got to joke that this is one of those rare photo shoots where the subject is not expected to smile at all. So all smiling had to be done off-camera.

Lunch
Halfway through each day, we stopped for some food. On day one we ordered in sandwiches from Pickleman's, a local deli.

Directing
Setting up for the "monitor" shots for the Ghosts of Cortanis back cover.

Who said that?
The two-day shoot was a lot of work but was also thoroughly enjoyable. Everyone had a great time.

Time out
James adjusts his tripod while setting up for the "monitor" photos.

Kaitlin and C.J.
It's not often you get to pose for a picture with a character who's been living in your head for two and a half years.

Demon Steve
While changing over to the Demons photo set, Steve Fairchild helped test lighting settings for the new background. Naturally he kept his composure like a true professional.

Kaitlin transformed
After the first costume change (and wig), Kaitlin came back to the studio looking like a whole new woman, raring to start on another round of photos.

Pat and Naomi
Pat Hanna admires the photos being piped in from James' camera.

Kaitlin as Naomi
Kaitlin had not read the books prior to the shoot. I don't know how she managed to capture Naomi's character so well, but she couldn't have done it better.

Between shoots
At the end of the first day, Kaitlin still has energy to smile for a picture with C.J., James and Charla.

Charla at work
Charla Fashing puts finishing touches on Kaitlin before a shot.

Kaitlin
In spite of the dour mood of many of the photos, the shoot itself was a lot of fun.

Kaitlin
Another moment of levity between shots.

Catching light
In addition to helping out with costume, makeup and hair, Charla also helped position reflectors around Kaitlin during the shoot.

Vanda takes five
Kaitlin takes a breather while images are offloaded from the camera to the iMac.

James at work
Photographer James Fashing lines up a shot while C.J. and Pat await the results on the iMac.

James and Kaitlin
The photographer and his tireless subject during a quick breather.

Ringlight
One piece of cool equipment in James' toy box is called a ringlight, which allows for a powerful set of lights to be arranged directly around the lens. As we were winding down on day two, James pulled the ringlight out to play with a bit.

Vanda in action
This photo has a blue accent light coming in from the right side. This is so if I wanted to add an energy blast coming from the gun, it would be lighting her up.

Meet Vanda…. I mean, meet Kaitlin Donnelly, the young woman I met a short time ago (thanks to mutual friend Pat Hanna) who agreed to be my model in a photo shoot for the covers of my three books. In April, after many weeks of planning, Kaitlin, myself and a small group of very talented people got together in the studio to bring my character to life.

I’ve known James Fashing for over six years, and he’s a brilliant photographer in or out of the studio. He was the first one I approached to ask him if he’d be willing to help me with my book covers. After explaining my ideas, he enthusiastically agreed. Not only that, he described the project to his wife Charla, who is an experienced and talented theater stylist. Charla also agreed to help.

Finding my Naomi was honestly one of the easiest parts. My good friend Pat, who has been in the advertising business for many years and knows how to spot model-material, recommended a friend of his for the project, and as soon as I met Kaitlin I knew instantly she was the one.

That evening, she and I picked out costume elements online and made sure everything was sized to fit her. When enough of the pieces had arrived, we got together for a costume dressing. I got to introduce Kaitlin to James and Charla, and we talked about the details of the shoot and went over the kinds of shots I was after. I wanted to get not only cover shots, but also plenty of other coverage in case I wanted to do box set art or other promotional materials for the books (like this Web site). The leather jacket was custom-made to Kaitlin’s measurements.

Naomi’s hair is black, and Kaitlin’s is not. Furthermore, the character’s hair appears different on each of the three covers, showing Naomi’s progression in the stories. Kaitlin agreed to dye her hair black (!!) and two wigs were ordered, one black and one dark purple. Thankfully, Charla was there to help with putting the wigs on correctly and assisting Kaitlin with makeup and nail polish with the costume changes.

Two props had to be created. The powered iWear set was built by my colleague Ben Spears, who is a modeler hobbyist. He delivered a beautiful headset that ran on a lithium battery which could be hidden beneath Kaitlin’s hair. Then there’s the incredible Ixxis-DE pistol, which was assembled and hand-painted by another co-worker of mine, Joy Page. Joy is an amazing artist and both her and Ben’s talent is barely evident in the photos; you really have to see these amazing props with your own eyes to truly appreciate them.

As it happened, the weekend we scheduled for the shoot was the weekend after Easter. Due to its proximity to the  holiday, James found that he could get his hands on a Nikon D810 for an extended rental period. This is a 36-megapixel professional camera, the likes of which we don’t keep around the communications department. (We have some good high-grade hardware, but not that high-grade. Ken Rockwell described it as “the world’s highest technical image quality DSLR.” As of mid-2015, it’s a $3,000 piece of equipment.) The opportunity was too good to pass up, so we had the D810 shipped in from New York for the shoot.

The two days we spent shooting were incredible fun. We started around 10am on Saturday morning, beginning with the set for Ghosts. These pictures would be Naomi at her most vulnerable, with long hair and a distinctly timid demeanor. Before our eyes Kaitlin became the character of Naomi. It was remarkable. 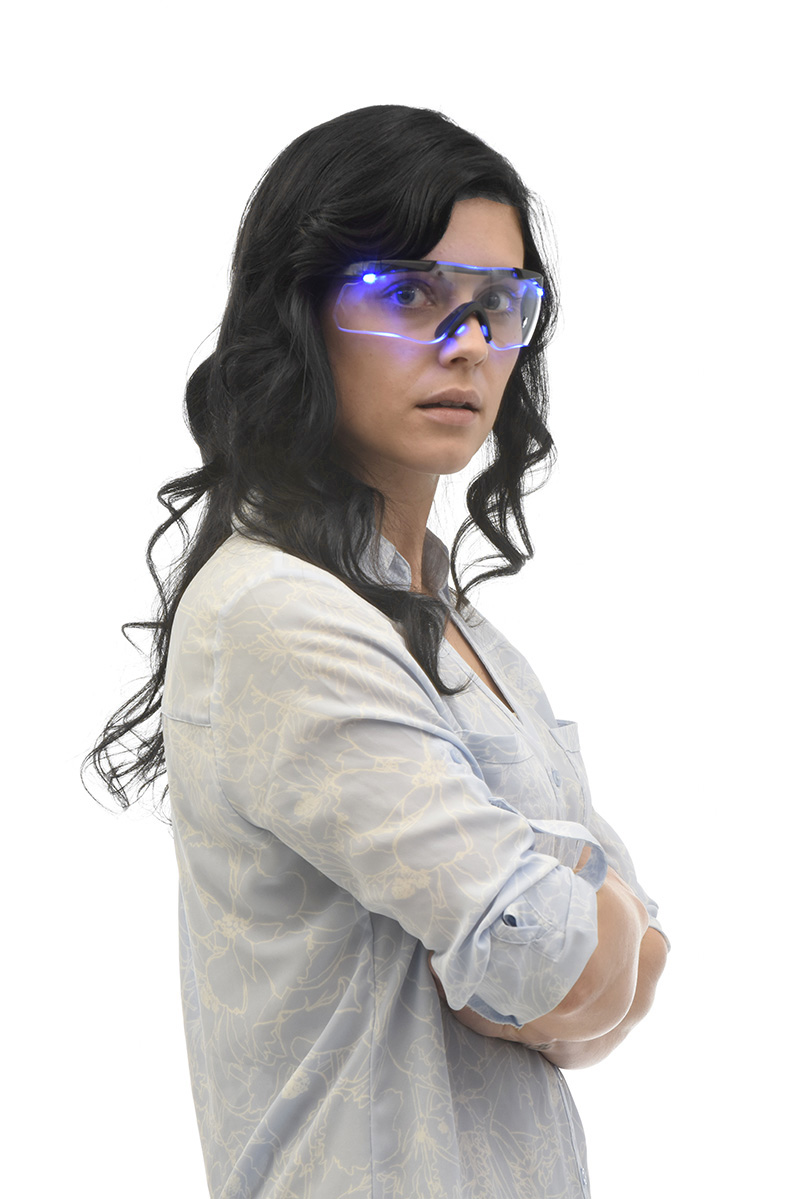 The Ghosts set was challenging because the iWear prop was extremely reflective, and was catching elements from all around the studio in the glass like a mirror. Fortunately, James Fashing has plenty of experience shooting wine, since he’s an amateur winemaker himself. So he knew just how to control the placement of everything in the studio to keep these reflections under control.

Furthermore, the LEDs in the prop also required a practiced hand. James knew just how to control the exposures so that the maximum of light was captured from the LEDs without blurring.

Joining us on Saturday was Pat Hanna, who was great to have on hand as he has years of professional experience directing photo shoots. Also there for the Saturday shoot was Steve Fairchild, an accomplished photog in his own right, many of whose pictures are featured in the slideshow above.

After several hours shooting for Ghosts, Kaitlin and Charla left to change outfits for the Demons set, and we switched out the backdrop for the new color scheme. When Kaitlin returned, the difference was dramatic. Not quite the warrior she would become for the cover of book 3, but much more in control and confident. (And yes, in Demons, Naomi gets a gun.) 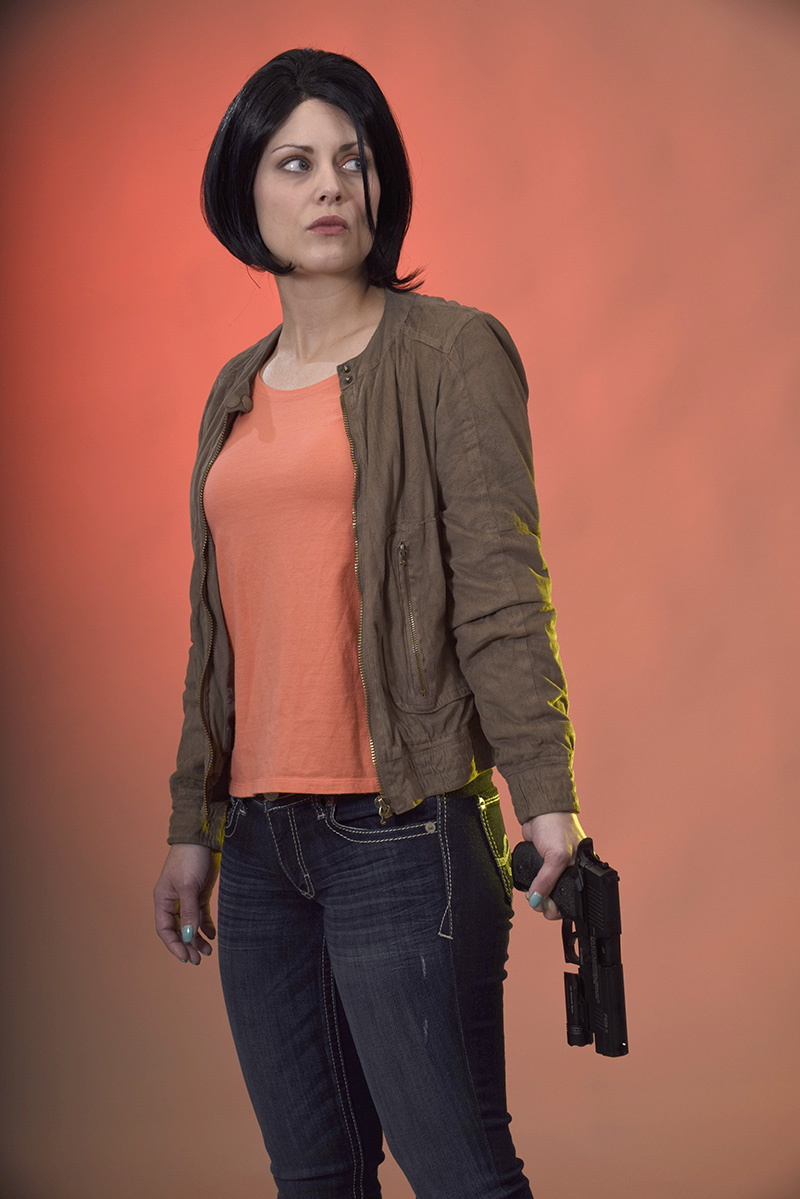 At one point during the Demons set, I wanted to shift Kaitlin’s finger to rest over the trigger. I was regularly moving her and positioning her like a doll for various poses between shots, and as I was doing this I went to reposition her finger on the trigger, and at first she wouldn’t let me. I had to tell her, “Kaitlin, relax your finger for me.” This is because Kaitlin is an experienced shooter herself and knows how to—and how not to—handle guns, even guns that don’t shoot bullets, like this one. And here I thought I was going to have to coach her how to handle the Sig Sauer.

We didn’t have time to finish with the Demons set on Saturday, so it’s a very good thing everyone was already signed up for a second day in the studio. The next day we were back at it.

We spent a few more hours finishing up the set from the day before, then Kaitlin and Charla disappeared again for the costume change everyone was waiting for. 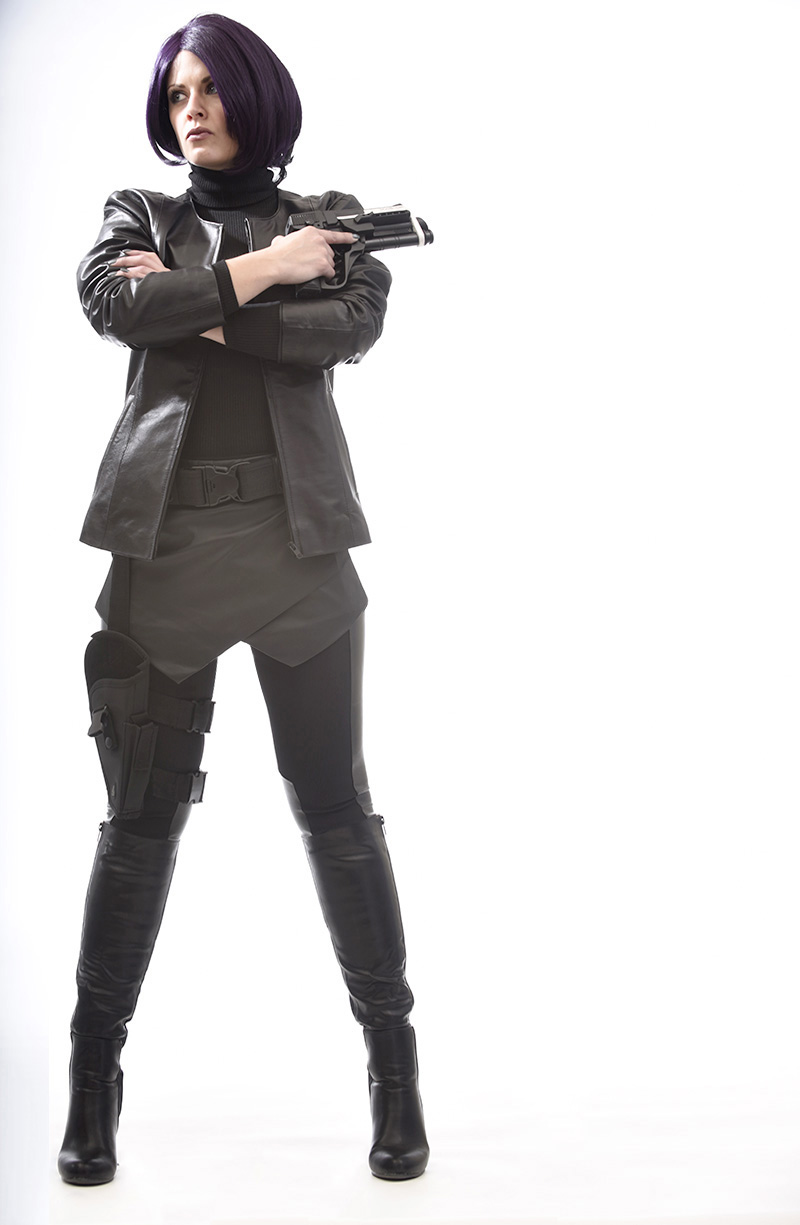 We were not disappointed.

There was Vanda, real as life. The rest of the afternoon was tremendous fun. What was astonishing to me was the fact that Kaitlin had never modeled before in her life. But not only was she taking direction without complaint and giving 100% like a pro, she was delivering expressions and emotions effortlessly, inhabiting my character as if she’d known her as long as I have. I can’t describe how cool a thing it is to see your fictional creation embodied by someone so authentically. I had to mentally correct myself several times to keep from actually calling her Naomi during the shoot. 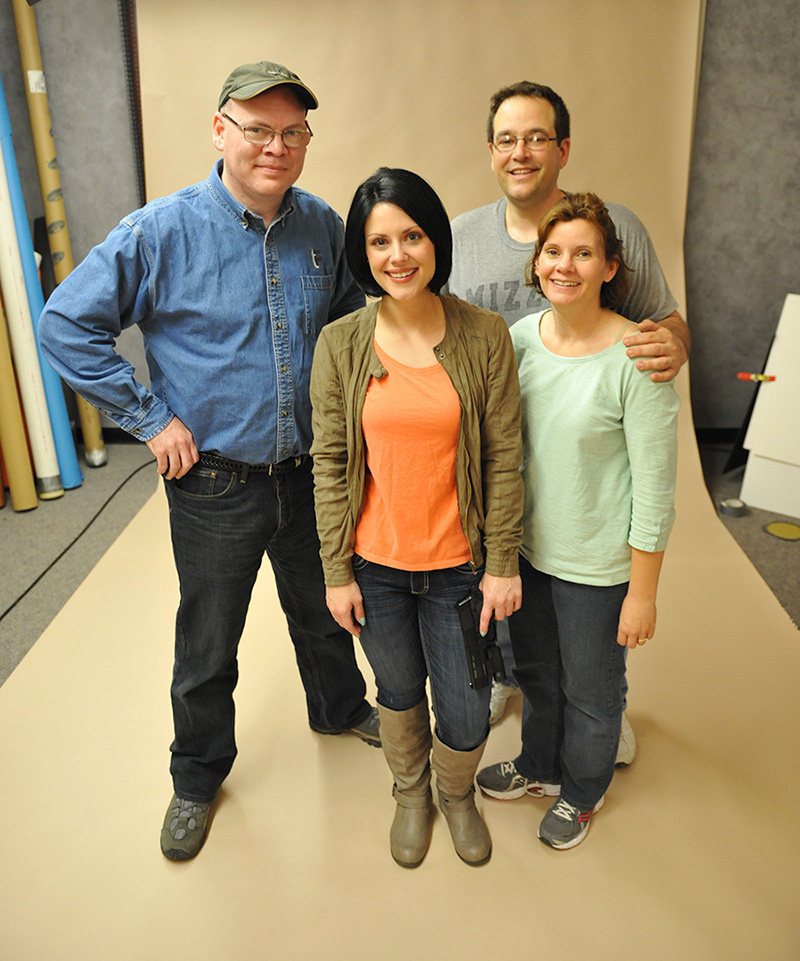 Thank you Kaitlin, for giving life to my character.

Thank you James, for lending me your significant talent and expertise to this project of mine.

Thank you Charla for giving up your weekend to lend us your expert hand with makeup, hair and costume. And for being James’ dutiful studio helper.

Thank you Steve and Pat for being there with additional ideas, suggestions and practical assistance. (Steve, the photos you took are invaluable.)

Thank you Joy for the stunning Ixxis-DE pistol. And thank you Ben for the awesome iWear set. The production value both of you lent to this project was Hollywood-level quality. –cjw

3 thoughts on “The unsinkable Kaitlin Donnelly”

I see why you picked her. She is very close to who I pictured. Great job and good luck with the book and trilogy. I know I will get a copy when it comes out.

It was a pleasure to help with the props for your “project” and the results are great. I expect more fun to come!

I can’t wait for the books to come out so I can get to know your character. The pictures you took of my daughter Kaitlin are amazing and I truly see the change in her from one costume change to another.