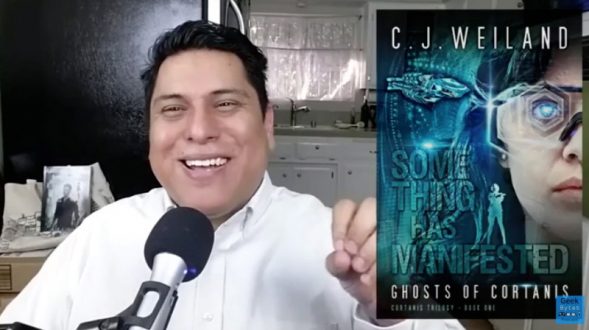 Ramon Mejia’s LitRPG Podcast did a review of Ghosts of Cortanis in his latest episode! I had contacted Ramon just the week previous inquiring about getting Ghosts on his show, and he told me he’d give the book a read. I didn’t expect that it would show up in the very next episode, but there it was!

“The story made me think, which is always a sign of good science fiction in my opinion, and good storytelling. …It’s an example of something that expands the genre. It’s not the same old fantasy adventure go-kill-stuff-get-a-level-up-and-save-the-princess thing. It’s very speculative, and deals with some really cool things.”

Ramon had some great things to say about the book and I won’t make a habit out of responding to every review I get, but since this is the first time I’ve been featured on a podcast, I couldn’t help saying thank you to Ramon for reviewing my book and talking about it on his show. Ramon was also kind enough to leave me a written review on the book’s Amazon page as well. Ramon is awesome. Click above to see Ramon’s review, starting at 45:11 in the playback. (He saved it for last.)