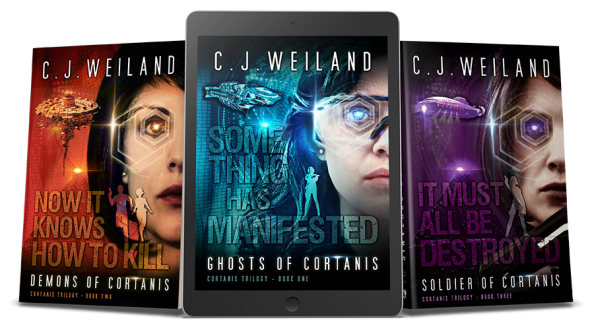 It’s been an incredible week! 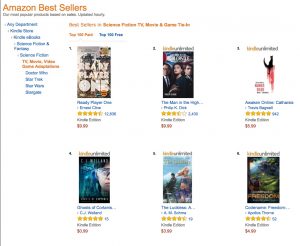 Yes, that’s my Naomi, sitting right there at #4 on the Amazon Best Sellers list for Science Fiction TV, Movie & Game Tie-In. This screenshot doesn’t show it, but Ghosts was situated there along with The Martian by Andy Weir, Ernest Cline’s latest book Armada, and the venerable The Hitchhiker’s Guide to the Galaxy by Douglas Adams. Further down the list you get to such estimable books such as Jurassic Park, Starship Troopers, and no small number of Star Wars and Star Trek novels.

This morning, on the Cyberpunk Best Sellers list, the book reached #7. 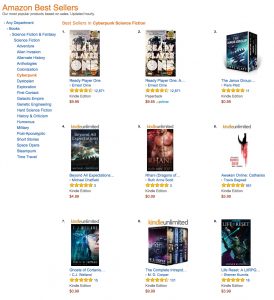 This is the category where the Cortanis trilogy really lives and breathes. Here it is competing with genre heavyweights Neal Stephenson (Snow Crash), Ernest Cline (Ready Player One), Philip K. Dick (Do Androids Dream of Electric Sheep) and William Gibson (Neuromancer). In this category, it is an honor to even reach the top 100 and be counted among these lions of literature, for however brief a span. It is dreamlike to even be typing these words right now.

I have Stuart Thaman to thank, for his incredible promotional efforts on my behalf this week. I contacted Stuart a few weeks back, when I came across a conversation on Facebook about his resources, speaking very favorably about him. I did some research into his services, and immediately realized something, something I’d known intuitively for months if not years—I don’t even know where to start promoting my books. The task was incredibly daunting to me, and reading about Stuart’s experience and credentials, and looking at the services he was offering for the rates being asked, I came to the realization that I would much rather pay someone a fair rate for handling my online promotion efforts than re-learn this wheel for the first time myself. Stuart seemed confident that I would make back my investment in him or he would work with me until I did.

I don’t have the best experiences dealing with people I don’t know over the internet and paying them to perform services for me. It can be hit and miss. I’ve lost hundreds of dollars on the misses. But I had a good feeling with Stuart. I got a strong sense that he was the real deal, that he knew what he was doing and that he’d make an excellent partner in this endeavor. I decided to take risk, and went all-in.

I couldn’t be happier with the results so far this week. Cortanis has made its presence known in a big way and is now rubbing elbows with some world-class authors I truly admire. And this is only the first book: Stuart concentrated his ad buys and promotional efforts solely on Ghosts. We’re hopeful that this will lead to increased sales of Demons and of course Soldier, ultimately. But neither of those books are being promoted yet.

This fall I want to release an omnibus edition of the trilogy. Now that it’s complete, there’s no reason it can’t be repackaged as a complete three-volume “box set”. I really wish I could do an actual box set, of the paperbacks, but so far I don’t know how to go about doing that. But anyway, it’s not paperbacks that are rocketing my book up the charts, it’s the ebooks. And it seems like the first book is doing well enough that maybe an omnibus edition would do well. No sense in not finding out!

I have a few more things planned for my site… stay tuned.